For the benefit of non-rider highway designers and traffic engineers, the key differences between motorcycles and other vehicles are set out below:

Motorcycles have a much greater need for a consistent and high coefficient of friction from the road surface than twin-track vehicles, especially on wet surfaces and in areas requiring braking and steering.  Riders adopt an angle of lean to negotiate a corner that is related to speed and bend radius; any change in grip between tyres and surface can destabilise the machine.  Any deviation from a consistently level surface in the same areas can seriously impair the motorcycle’s ‘road holding’ ability.

A sudden change in surface level or evenness rapidly loads and unloads the suspension, which reduces the grip between front wheel and road surface. In other words, the wheel rebounds upwards and in severe cases can lose contact with the surface.

Unpredictable changes in the road environment that call for rapid deceleration or braking while cornering can cause the motorcycle to ‘sit up’ and take a tangential line away from the bend.

Anecdotal evidence suggests that riders on a bend tend to ‘fixate’ on what seems to be the object in their path most likely to hurt them (eg a tree or sign post). Some argue that the rider will then usually hit that object.  Whether or not target fixation is a genuine phenomenon, research indicates that 50-70% of all motorcyclist collisions with roadside furniture result in fatal or serious injuries (Safety Barriers and Motorcyclists Transport for Scotland 2008).  Wherever possible, highway furniture or signage should not be positioned on the outside of bends, creating a ‘clear zone’ in higher speed rural situations to minimise these risks. Other options include: 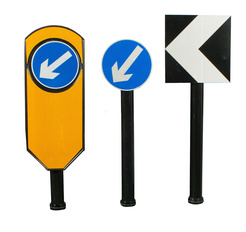 The Council implemented a site-specific engineering solution on one particular bend where there had been three motorcyclist fatalities in five years and a number of serious injuries including car drivers.  The principle behind the scheme, now recognised by the Highways Agency, is called “where you look is where you go” (WYLIWYG) and works on the basis that if you can ‘hold’ the rider’s/driver’s eye around a bend then they are likely to successfully negotiate it. Filming of this and similar bends had indicated that incorrectly placed chevron signs could misrepresent the radius of the bend, especially at night. Hazard marker posts were positioned on the outer edge of the bend to focus the rider’s eyes on the ‘vanishing point’.  For this to be effective, it is advisable that posts should be spaced no more than 5-7 metres apart.  The owner of adjacent land also removed bramble overgrowth to maximise visibility across the inside of the bend. This low cost measure appears to have been successful, with no injury collisions more than two years after completion.

The predictability of bends is also important.  Curves and bends are often popular among motorcyclists because of the technique challenges they present, the scenery with which they are often associated and their contribution to the riding experience.  However, due to braking difficulties, unpredictable curvature and road grip represents a higher risk to motorcyclists than other motorists.  Conversely, predictability benefits all.

The crossfall on bends can present challenges for motorcyclists due to the reduction in contact between the tyre and road surface, particularly in wet conditions.  It is therefore also wise to optimize crossfall and longitudinal surface consistency.

The Department for Transport has issued guidance on reducing street clutter in Traffic Advisory Leaflet 1/13 ‘Reducing Sign Clutter’. This aims to maximise safety, improve the appearance of towns and assist mobility and visually impaired people.  Limiting the number of roadside objects with which a motorcyclist who leaves the carriageway can collide, reduces the likelihood of injury.

Drivers often do not ‘see’ motorcyclists because of the relatively small frontal area presented by their machines, the presence of other road vehicles and roadside obstructions.  Well-designed and maintained visibility splays at junctions are required so that drivers do not have their sight lines obscured.

Potentially higher speed on rural roads, especially those that are attractive to leisure riders, means that much of this Chapter has significant importance for casualty reduction on rural roads.

Traditional designs of roadside safety barriers have received considerable criticism from rider groups and road safety auditors because of the specific risk of injury to motorcycle riders in a collision. Crash barriers have usually been designed to contain an impacting twin-track vehicle and prevent it crossing the path of oncoming traffic. However, the gap beneath the main panel of continuous barrier designs can allow motorcyclists to slide through and collide with the fixing posts.  Although motorcyclists contribute only 1.1% of traffic, they account for 18.6% of fatal safety barrier casualties (Safety Barriers and Motorcyclists Transport for Scotland 2008).  Further, impacts with barrier support posts have been estimated to cause a five-fold increase in injury severity compared to the average PTW crash (Barriers for Change, EuroRAP, 2008).

Very severe and fatal injuries to motorcycle riders from these impacts are a particular issue in rural areas or on motorways where these barriers are common. Similarly, wire rope type barriers, whilst providing a relatively low cost and effective method of containing vehicles, present potential additional hazards to sliding motorcyclists.

In 2012, FEMA published the document “New Standards for Road Restraint Systems for Motorcyclists”. This provides information on possible solutions for road authorities and infrastructure operators who wish to upgrade road restraint systems and presents the current technical standards, statistical data and research, best practice and case studies.  It also lists and details many road restraint products available on the market.

Pending further research it seems that retrofitting impact mitigation measures to posts and some means of preventing dismounted riders from passing under rails would improve secondary safety for falling riders in safety barrier collisions. TD 19/06 Requirement for Road Restraint Systems (DMRB Vol 2 Sec 2) advises designers that at high risk sites “it is recommended to use an ‘add on’ motorcycle protection system to post and rail type safety barriers to minimise the risk of injury to motorcyclists.”

At priority junctions and roundabouts it is important to optimise sight lines and to provide good braking surfaces for all users. This will mitigate the risk of drivers not responding to motorcyclists’ presence even when the latter have priority. The relatively small frontal aspect of motorcycles makes this particularly important because they are more difficult for drivers emerging from side roads to identify.

Where roads approach priority junctions at a shallow angle, car drivers are required to look over their shoulder to check for any oncoming vehicles. A driver’s view can be obscured by the central door pillar, making it more likely they will fail to see approaching motorcyclists. Side roads approaching priority junctions as close as possible to 900 helps to reduce vehicle speeds and improve the visibility of motorcycles on the main road. Wide entries to priority junctions can encourage drivers to pull up on the offside of the rider, especially if the latter is on a low powered machine. Excessive width of the entry can also encourage two cars to pull up side by side, obscuring the adjacent driver’s view of oncoming traffic on the main road.

Roundabouts should be designed with the correct entry path curvature to ensure that approaching vehicles are not positioned at an excessively oblique angle and to help reduce the speed of vehicles approaching the roundabout.

A balance will need to be struck between capacity and safety. Concentric overrun areas often feature on roundabouts to increase the deflection around the roundabout, reduce speeds and make more conspicuous to approaching vehicles.  Care needs to be taken with this kind of treatment to ensure that it does not introduce an additional hazard for circulating motorcyclists. Some overrun areas have been implemented with a slight kerb up-stand (c. 10-20mm) between the ‘extended’ area and the remaining carriageway.  As a motorcycle must lean to negotiate a roundabout, crossing the up-stand can cause a rider to lose control. Similarly, a substantial variation in the skidding resistance between two different types of material can also cause loss of control. Thermoplastic road markings and some types of block paving can be a particular problem for motorcyclists in these situations. A more acceptable alternative would be the use of a high quality, cold-applied, coloured antiskid material which provides the required visual effect without presenting a hazard for motorcyclists.

The positioning of street furniture and vegetation outside visibility splays is critical for safety at junctions.  A significant proportion of collisions between motorcycles and cars in urban areas are caused by emerging drivers failing to see the oncoming motorcycle.  Higher traffic speeds on rural roads make consideration of sight lines particularly crucial.

The rails of on-street Light Rapid Transit (LRT) systems can have a destabilising effect for motorcyclists and cyclists. This equally applies to rails at traditional level crossings, particularly where the carriageway crosses the railway at an angle.  When considering potential or existing schemes, seek out the experience of other LRT projects such as Manchester, Sheffield, West Midlands, Nottingham, Edinburgh and Croydon.

To reduce sudden variations in steering or braking and to minimise the consequences of any loss of control for motorcyclists, consider the following: